Asian Americans often must deal with the “perpetual foreigner” stereotype. People assume that because they are racially Asian, they can’t also be Americans. Well-meaning people ask, “Where are you from?” Others shout, “Go back where you came from!” In extreme cases, Asian Americans have been attacked by people who blame them for the actions of an Asian country–any Asian country.

This is generally due to bias – unconscious associations, or stereotypes, that we pick up from our culture. Sometimes these are harmless. But when applied to people, these stereotypes can have serious consequences. In this case, the assumption is “if someone looks Asian, they must be foreign,” and it leads to Americans with Asian heritage being treated as foreigners in their own country.

When issuing orders to remove people of Japanese heritage from the West Coast, the government referred to Japanese Americans as “non-aliens,” to downplay the fact that they were American citizens. Even today, many people call camps like Heart Mountain “internment” camps, even though internment only applies to non-citizens.

Stereotypes affect everyone. For many people, “where are you from?” is simply small talk. However, for many Asian Americans, when they answer “Los Angeles” or “Chicago” or “Ohio,” people insist, “No, but where are you really from”–as if they couldn’t possibly have been born in the United States.

“When did it become a citizen’s responsibility to prove his innocence, especially when no charges of disloyalty were ever filed nor convictions established?”

“We Asian Americans need to embrace and show our American-ness in ways we never have before. We need to step up, help our neighbors, donate gear, vote, wear red white and blue, volunteer, fund aid organizations, and do everything in our power to accelerate the end of this crisis. We should show without a shadow of a doubt that we are Americans who will do our part for our country in this time of need.”

What is implicit bias? Saleem Reshamwala unscrews the lid on the unfair effects of our subconscious. Watch this short film produced by the New York Times to learn more about how bias can affect people.

“Because my experience as a member of Congress, Cabinet member and still on some occasions today, I get treated more as a foreigner than I do as an American citizen. So I just continue to wear this flag to say, hey, I’m an American. I’m proud to be an American. But I’m also proud of my Japanese ancestry.

When those placards went up after the executive order was signed, and it said: ‘Attention, all those of Japanese ancestry, alien and non-alien…’ I said to my brother, ‘What’s a non-alien?’ He said, ‘That’s you.’ I said, ‘I’m not a non-alien! I’m a citizen!’”

“The Japanese race is an enemy race and while many second and third generation Japanese born on United States soil, possessed of United States citizenship, have become ‘Americanized,’ the racial strains are undiluted.”

–General DeWitt, final recommendation on the exclusion of Nikkei from the West Coast

A Japanese American’s store in Oakland, California, on December 8, 1941. 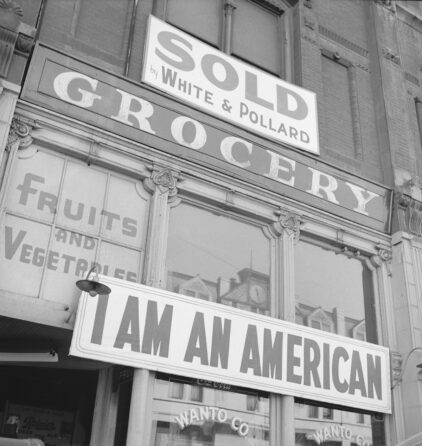 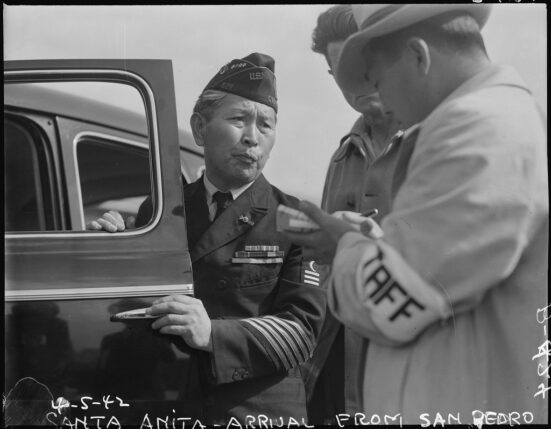 Photo by Clem Albers, courtesy of the National Archives 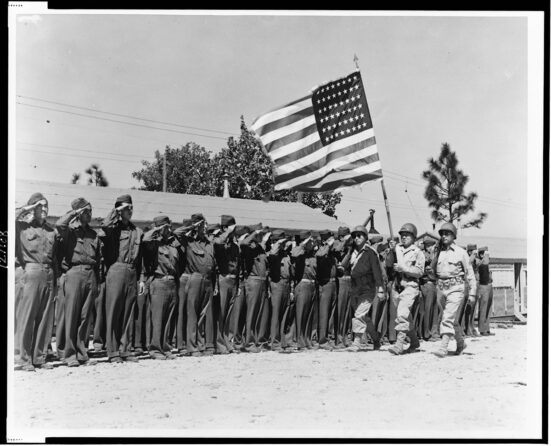 Image Courtesy of the Library of Congress Prints and Photographs Division

The Color Guard of the Army’s 442nd Regimental Combat Team stands at attention while citations are read following the fierce fighting in the Vosges area of France on November 12, 1944. 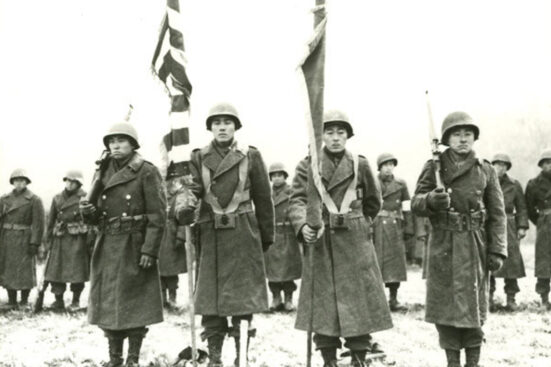 Image courtesy of the Department of Defense

The color guard leading a parade of Boy Scouts through Heart Mountain. 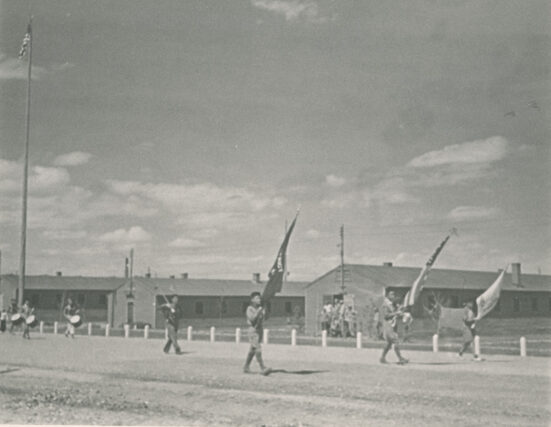 Courtesy of the HMWF Okumoto Collection