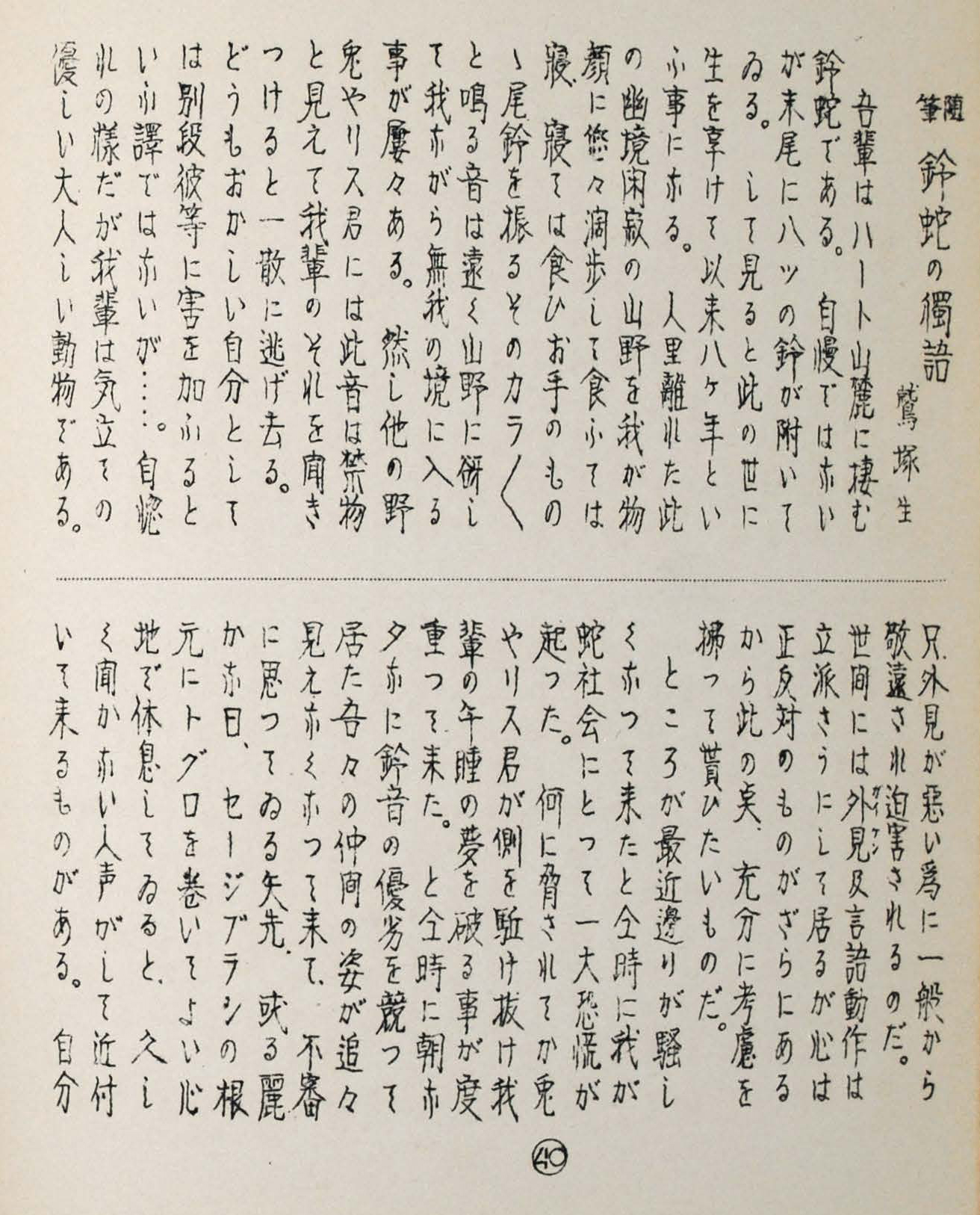 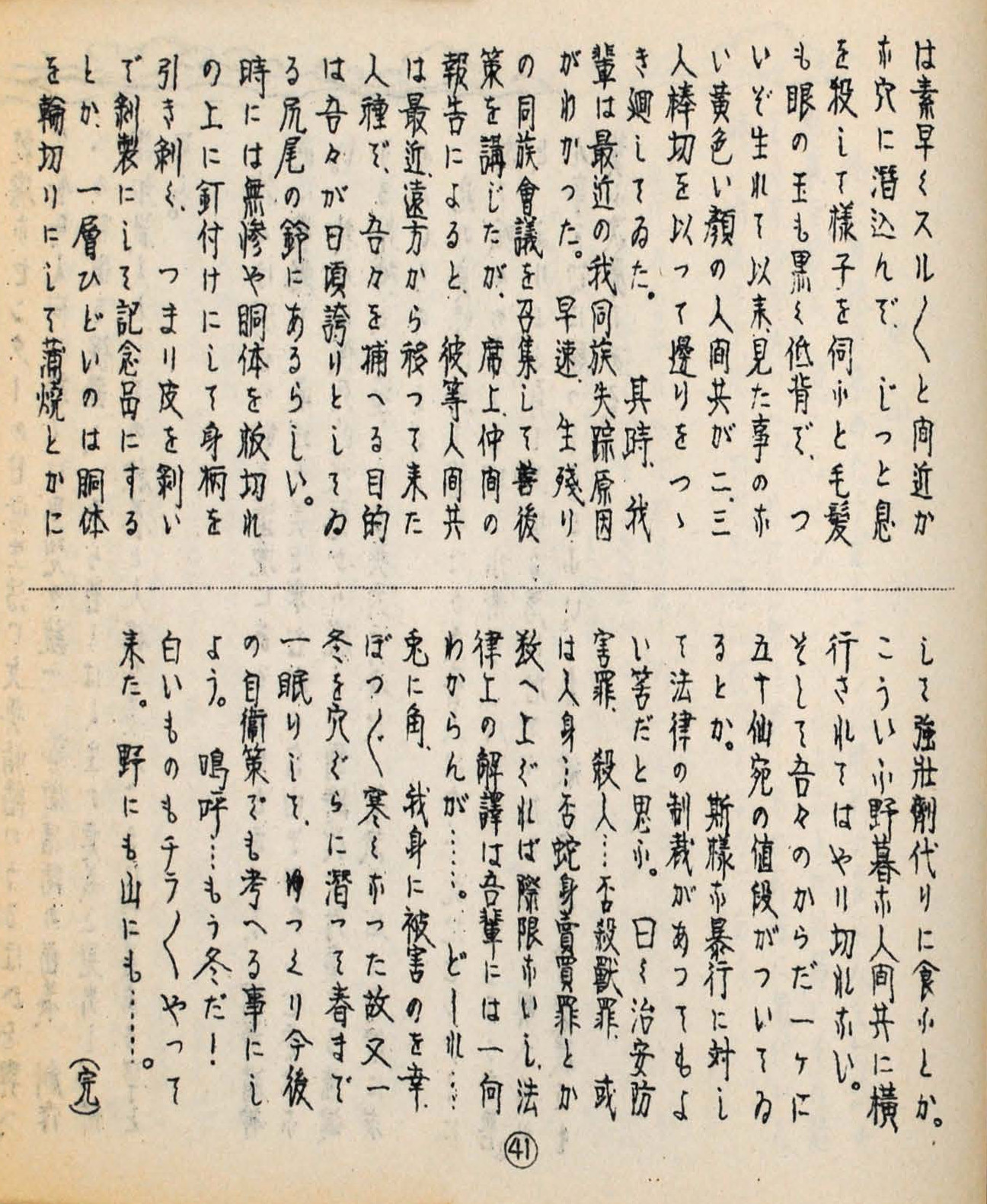 I am a rattlesnake.2 I live near the foot of Heart Mountain. I hope this won’t be taken as boasting, but the rattle at the end of my tail has eight sections. Come to think of it, that also happens to be exactly the number of years I have been on this earth so far. I have grown accustomed to sauntering around this secluded wilderness completely at my own leisure, feeling fully at home. When I hear the sound of my rattle echoing across the wild, wide open landscape, I enter a state almost like religious ecstasy. And yet that same sound, however, is apparently anathema to the jackrabbits and squirrels in the vicinity—they all scatter and hide as soon as they hear it. I simply cannot fathom why. I personally have no intention of harming any of them… At the risk of sounding self-serving, we rattlesnakes are in fact a rather gentle and docile species. We are excluded and persecuted by others solely because of the way we look. There are many in the world whose appearance seems beyond reproach (not to mention their words and deeds) when in reality nothing could be further from the truth: what is in their heart belies all appearances. This is a point which, I believe, warrants serious and careful consideration.

Recently, however, everything changed. The new noise and bustle in the area has occasioned a tremendous panic in the snake community. The first sign of trouble was my afternoon slumber being interrupted on a regular basis by rabbits and squirrels who had evidently been startled badly enough by something that they ran right by me in their attempts to escape. It was also right around this time that we began to notice that some of our number—snakes who could be relied on to join in our daily rattle-judging—had gone missing. That was how I knew something was afoot. Then one fine day as I was relaxing comfortably coiled up underneath a sagebrush, I heard people talking—something I had not heard in a very long time. As the sounds came closer, I quickly slithered into the nearest hole in the ground. Once I was hidden, I held my breath as I peeked out to see what was going on. I saw two or three humans of a variety I had never seen before in my life. They were smaller in stature, with dark hair and eyes, their faces yellow.3 Each held a stick, which they used to poke around on the ground. That was when I finally understood what was behind the recent disappearances of so many of my kin. We immediately convened a Special Session of the Species to discuss what action should be taken. Some other members in attendance revealed that this was a race that had only recently arrived here from far away. According to their report, to these people, the prize for catching us was the very rattles we valued so highly ourselves. Some of the more appalling cases involved our kind being nailed to boards to have their skin peeled off, which would then be dried and fashioned into trinkets. Perhaps even more horrifying were the incidents of snakes being sliced up, grilled, and consumed as a type of health tonic. I, for one, will not stand for being tread on by such boorish humans. It seems that there is even a price on our heads: fifty cents apiece. There ought to be some legal action taken against these people for the violence they have inflicted upon us. I am certain there is no end to the charges we could bring against them… I believe it is called “disturbing the peace,” just for a start. Then there’s man—that is, snakeslaughter. And probably human—er, snake trafficking… I do not claim to be able to judge how these would hold up in court… In any case, now that it is slowly growing colder, one thing we can do now to try to protect ourselves from this threat is for each of us to find a hole to crawl into for the winter, settle in until next spring, and use the time to think about how we might be able to defend ourselves. It is nearly winter now. The hills and the prairies are dusted with white.

2  The first line parodies the opening line of Natsume Sōseki’s 1905 debut novel I Am a Cat (Wagahai wa neko de aru), setting the tone for the essay as being in a similar satirical vein to the novel.

3  Description satirizes racist descriptions of Japanese people at the time.