Memories of the Inland Sea 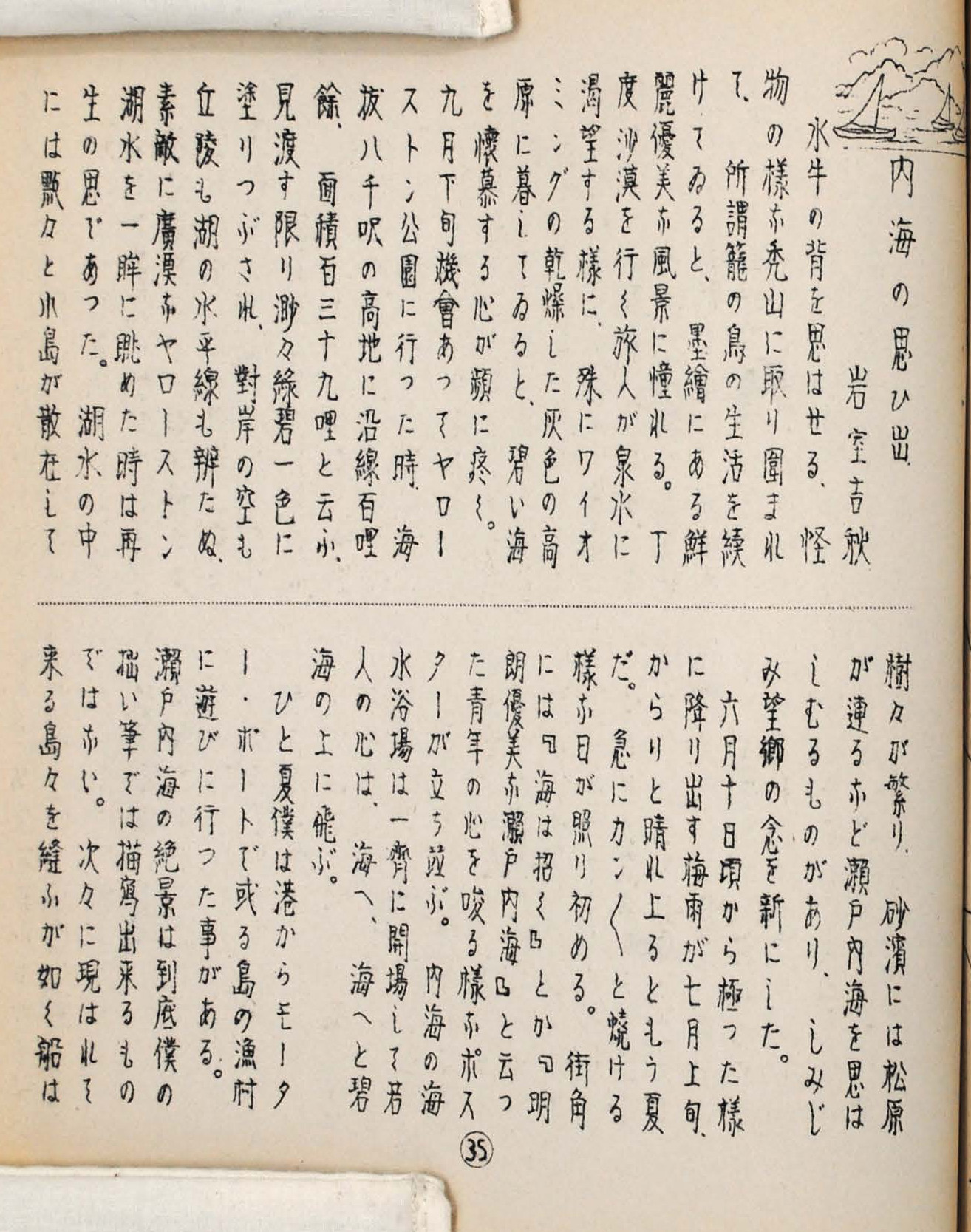 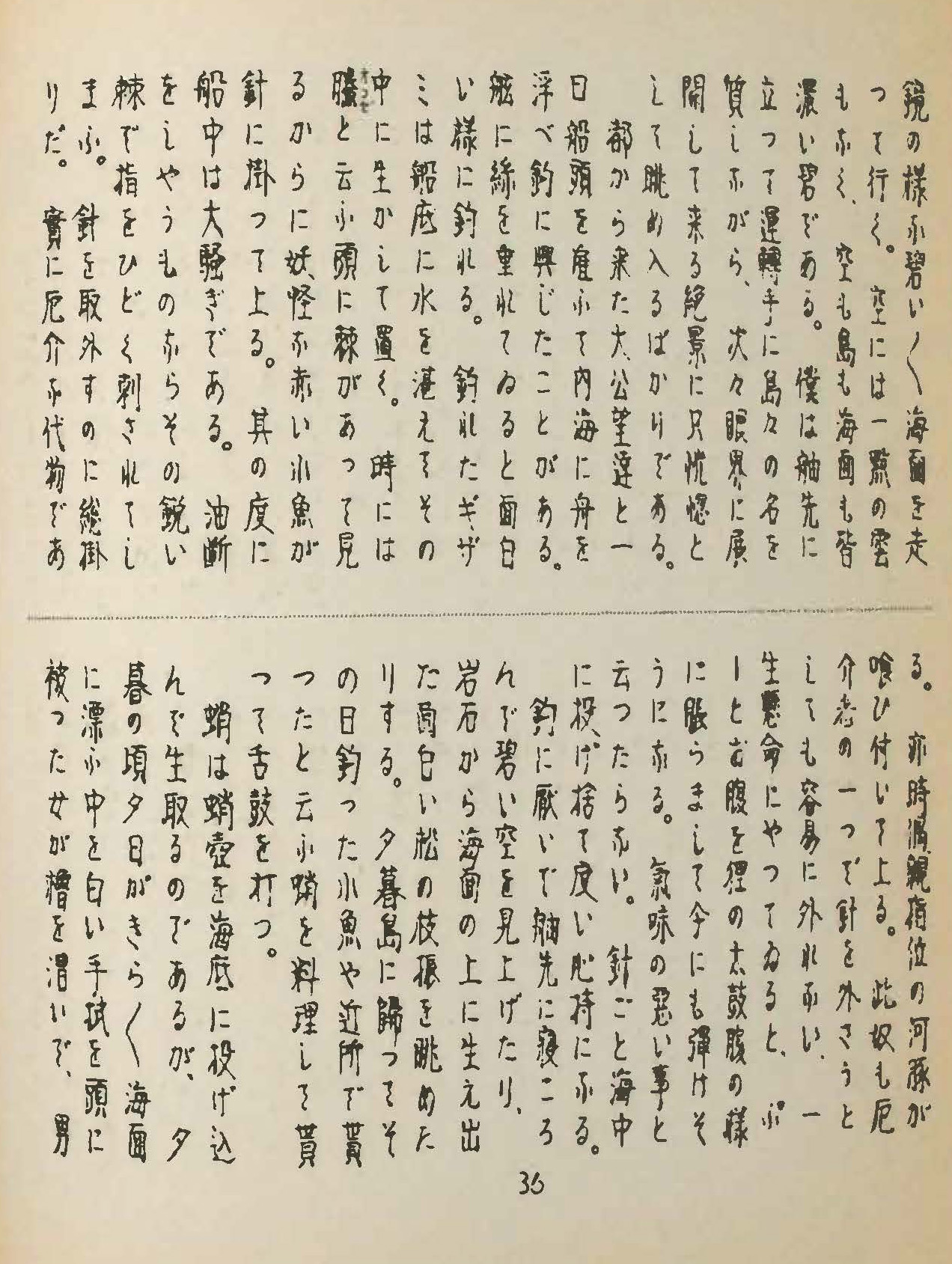 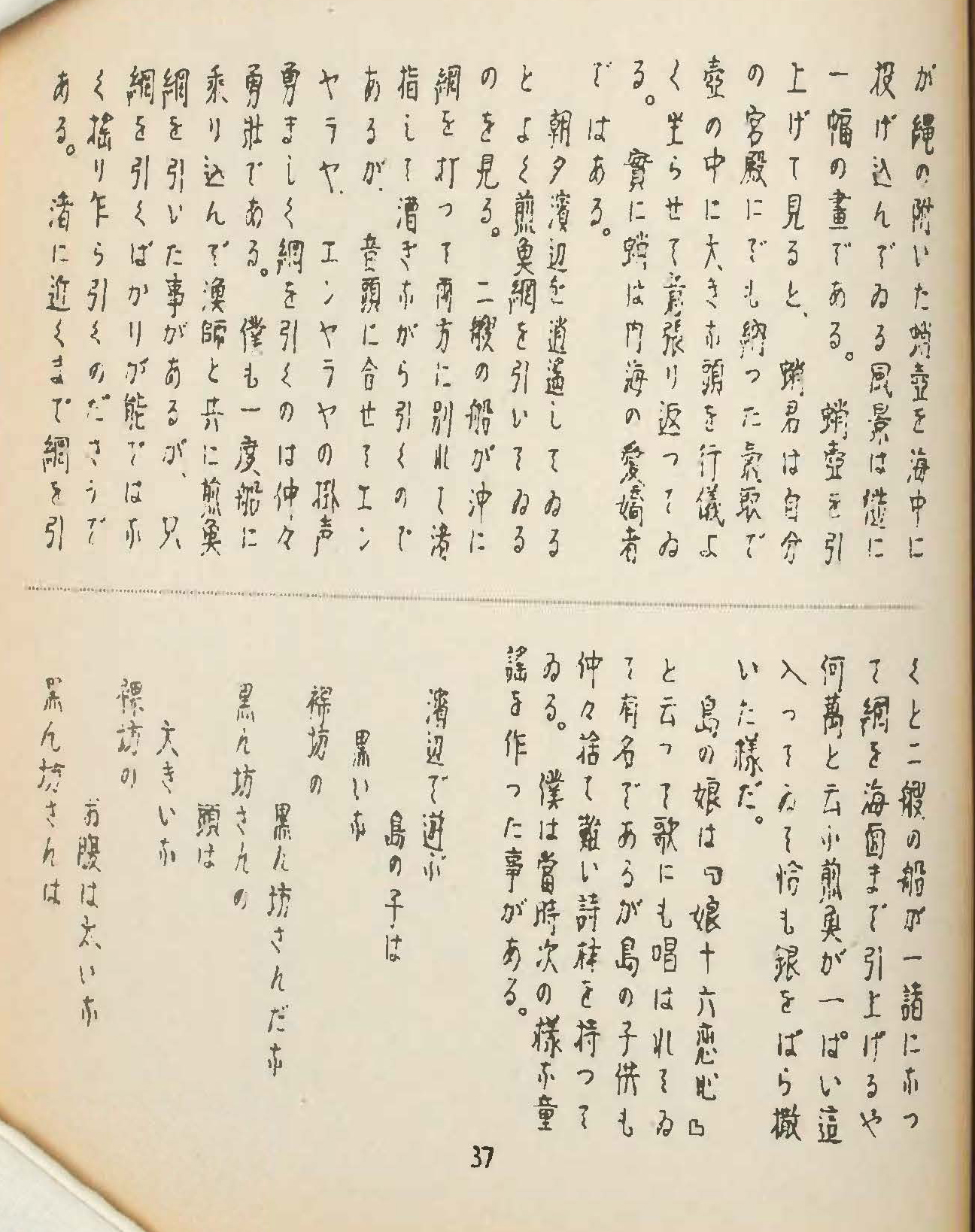 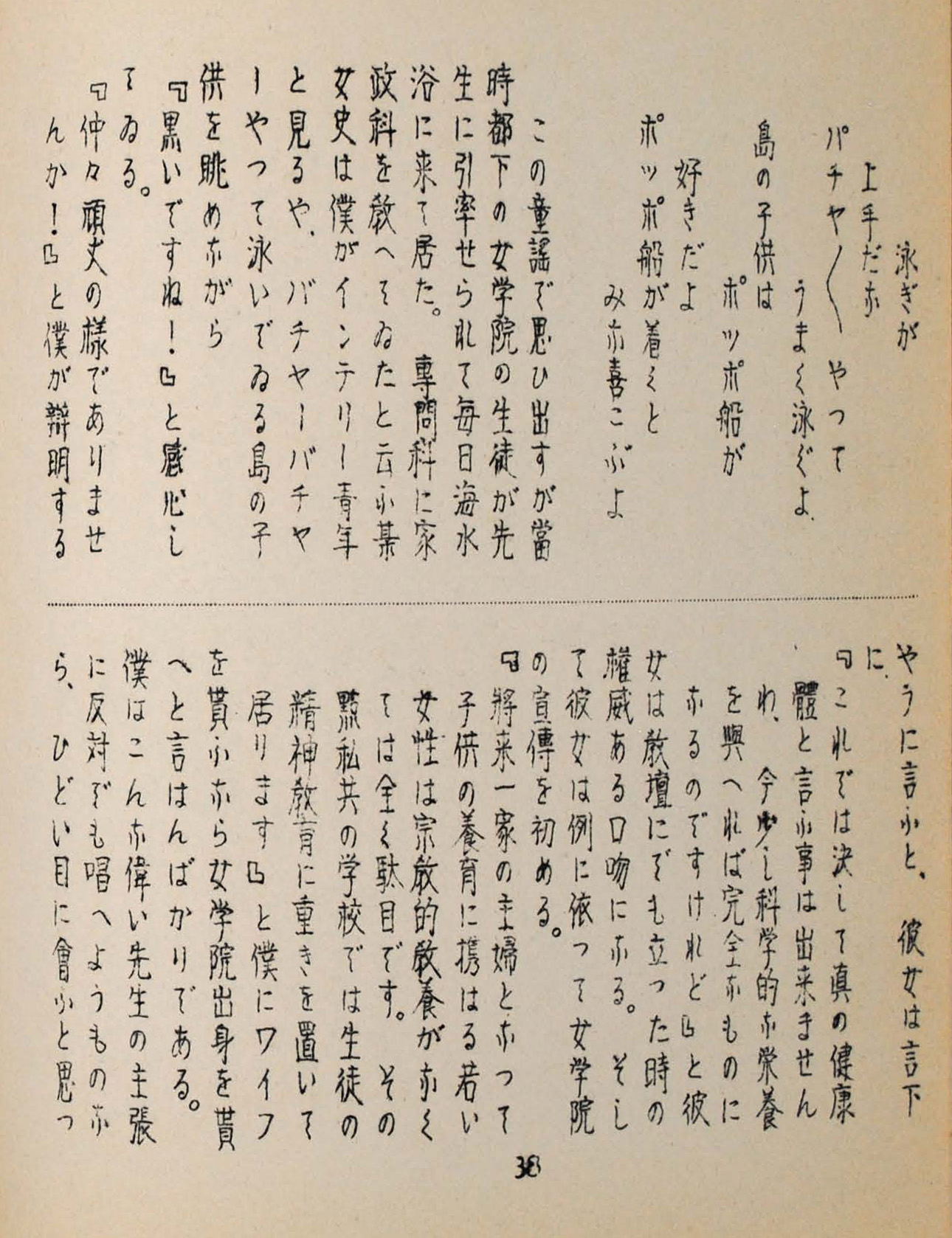 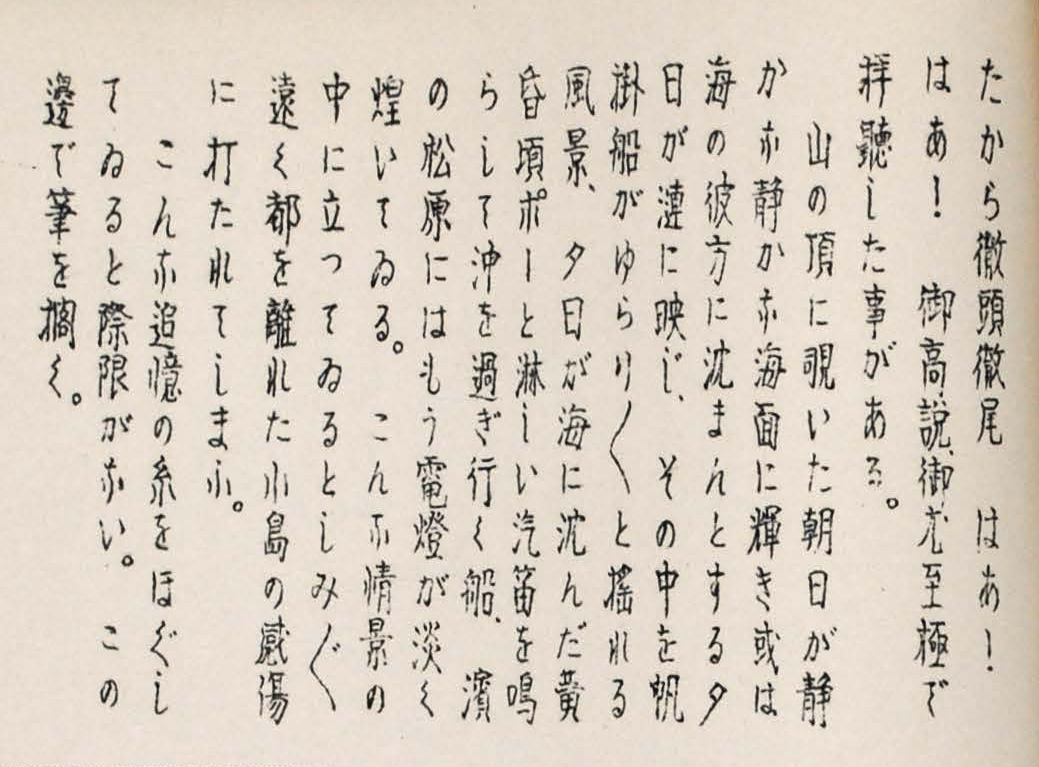 Now that I’ve been living here like a bird in a cage, so to speak, walled off by the monstrous bare peak that calls to mind the back of a buffalo, I start to yearn for the type of landscape found in an ink painting: alive, flowing, and elegantly varied. Just as the desert can make a traveler feel a desperate need for an oasis, for someone with an attachment to the blue of the sea, living in these dry, grey high plains of Wyoming makes that longing all the worse. I had the opportunity to visit Yellowstone Park in late September. There I visited vast, magnificent Yellowstone Lake, which is located at an elevation of eight thousand feet, with more than one hundred miles of shoreline and an area of 139 square miles. The sight of it was enough to make me feel renewed. Everything as far as the eye could see was saturated with vivid, shimmering greens and blues such that it was impossible to tell the water of the lake from the rolling hills on the opposite shore and in turn impossible to distinguish those from the sky above. There were densely wooded little islands scattered around the lake and pine trees to the rear of the sandy beaches surrounding it. This brought back memories of the Seto Inland Sea1 and reminded me of how much I used to love and idealize it.

The monsoon rains unleashed around the tenth of June give way to sunshine by the first weeks of July; that is when summer really starts. Suddenly the sun begins to become overpowering. The days take on a sweltering quality. Every street corner is plastered with posters meant to entice young men. They say things like “The sea beckons!” and “The breathtaking inland sea” in big, bold letters. The public swimming areas are all open and the hearts of the youth were ready to fly up and over everything out into the blue of the sea.

One summer I took a motorboat out to a fishing village on one of the islands there for a short time. The beauty of the landscapes I found at the Seto Inland Sea was far beyond the power of my pen to even describe. Boats glided along the deep blue, mirror-like surface of the water, weaving in and out among the endless succession of islands that appeared. There was not a cloud in the sky, and everything in that world—the sky, the islands, the sea—was deep shades of blue. I stood near the bow of the boat, demanding of the skipper the name of every island we passed. I could do little else but watch in ecstasy the beauty coming and going before me.

While I was there, I happened to go out once with some serious anglers who had come out from the big city. We hired a boat and spent an entire day fishing. I put a line out over the gunwale and caught plenty without even trying. We put a little water in the bottom of the boat so we could put any wrasses we caught in there to keep them alive. We also brought up our lines a few times only to find a stonefish—an ugly little red fish with spines on its head—on the other end. There was a commotion each time one was pulled into the boat. One false move and those sharp spines will quickly find their way into someone’s hand. It takes everybody on board just to get the hook out. A stonefish is nothing but trouble. Then still other times you might get a little pufferfish about the size of a thumb on your line. This one is another real piece of work. Getting your hook back from one of these is a real challenge. You can be working away at it, trying to get the hook loose and then all of a sudden it puffs up tight as a drum. It is enough to make you want to just cut the line and throw the disgusting thing back into the water, hook and all. When I was tired of fishing, I lay out on my back at the bow and looked up at the deep blue of the sky, sometimes watching the wind blow through the peculiar pines growing on the rocks that jutted out from the surface of the water. When the sun went down, we went back to the island where we were staying and had someone cook up what we had caught (along with some octopus and other treats we had picked up nearby) and tucked in.

Octopus are caught using special pots let out on ropes from a boat. The pots sink down to the seafloor to trap them so they can be brought up alive. They take the boats out just as the sun is going down and sunset starts to glimmer on the water. The women row, white bandanas tied around their heads. The men, meanwhile, go on laying the octopus pots into the water. The whole scene comes together like a perfectly composed painting. When an octopus caught in one of the pots is brought up to the surface, it will be sitting there like the lord of its own little manor, its large head bobbing as it politely but firmly resists all attempts to remove it from the trap. Indeed even the octopus of the Inland Sea is well loved for its unique charm and charisma.

As I wandered along the sandy beaches around dawn and dusk, I often saw locals working sardine nets. The boats worked in pairs, using one net between them. Each boat would cast out its end as both turned toward shore, widening the distance between them as they went. The way the people in both boats sing their work songs in a call and response following the leader produces a stirring spectacle. I even had the chance to go out and cast the sardine nets with these fishing folk myself once, and I can attest that there is considerably more to it than simply throwing out a net and pulling it back in. They explained to me that the nets must be shaken as they are pulled in.. Then as they approach the shore, they move to close the distance between the boats again, bringing up tens of thousands of tiny sardines in a heap that shimmers like so much silver.

There is a well-known song about the girls from the island at sweet sixteen, but the younger kids were a source of inspiration of another kind. I even tried my hand at writing a song about them while I was there.

One has a belly

Sticks out past his nose.

The darkest of them

And splash all over

The kids they sure love it

When the steamboats are out

And any time they see one

You can bet that they’ll all shout!

This song actually reminds me of one time when some teachers from a girls’ academy in Tokyo had been bringing their students to go swimming in the sea day after day. One day, one of the old schoolmarms in charge of them, a teacher of home economics at the school (who had apparently taken me for a youth of an intellectual bent) made a show of commenting on how dark the skin of the island children was as we watched them swim and splash around.

“They sure look fit, don’t they!” I countered.

“Far from it,” she snapped. “Swimming and sunshine have their benefits but are not enough to achieve true physical fitness. For more complete health, we add a little supplemental nutrition made possible through science.” She spoke with the authority of someone accustomed to standing at a lectern. Then she turned to pontificating upon the virtues of an academy education for young women such as that provided by her school.

Her advice to me was essentially that if I was planning to get married, I would do well to find myself an academy-educated girl. “Religious education is absolutely essential for our young women as they grow up and become the mothers of their own little families. Our school places a great deal of emphasis on the spiritual education of our students,” she explained.

I knew things would go badly for me if I tried to contradict the wisdom that she had deigned to bestow upon me—I could only listen and nod: quite so, yes, indeed. This was the most I would venture. In the early morning when the sun peeks around the tops of the mountains to glitter on the still, soundless sea, and again when the light of the sun glints off the rippled surface of the water as it sinks below the horizon, the sailboats can be seen swaying gently as they go. As the boats pass through the straits in the twilight with their lonesome steam whistles, electric lights twinkle faintly among the pines behind the beaches. I was struck with a wave of nostalgia as I imagined myself back in that landscape once again.

Once I start unspooling these threads of memory, I could go on forever, so I will close here for now.

1  Famous for its scenery and figuring in literary works since at least the 8th century, the Seto Inland Sea is situated between three of Japan’s main islands.

2  The source refers to the children a number of times using a word (kurombō-san) that was commonly used to refer to dark-skinned people at the time but is considered a racial slur today, so the translation is meant to reflect this characterization.